The CML language is based on the following strategic DDD domain model (or semantic model): 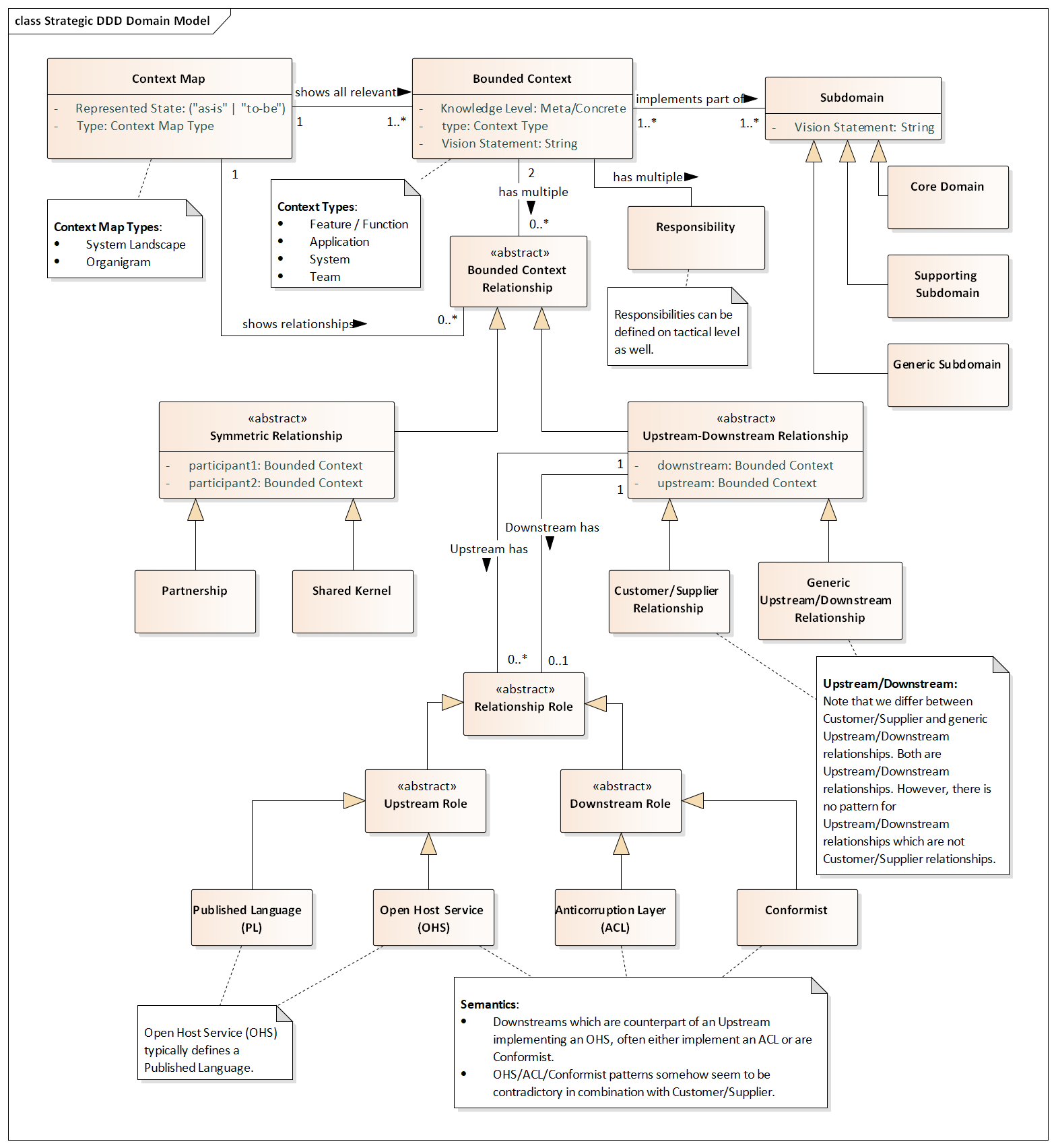 All the knowledge regarding the DDD patterns is derived from Evan’s DDD book and his DDD reference:

The following semantic rules are either implicitely given by the domain model (see above) on which the language is base, or enforced by corresponding semantic checkers. Note that the model and the semantic rules express how we understand the DDD patterns and how they can be combined.

#1: The relationship patterns Open Host Service (OHS), Published Language, Anticorruption Layer (ACL) and Conformist are not applicable for Partnership and Shared Kernel relationships. A violation of this rule would lead to contradictions regarding the definitions of the patterns and how we understand them. In a Shared Kernel relationship, two bounded contexts share a subset of its domain model and thus, technically, share code. The interaction between the two bounded contexts happens via this shared code. The usage of the four mentioned patterns contradicts with this approach. The same applies to the very tightly coupled Partnership pattern. Even if the contexts do not share code, the two contexts can only succeed or fail together.

#5: The Open Host Service (OHS) pattern is not applicable within a customer/supplier relationship. Whereas the customer/supplier pattern implies that the two involved teams work closely together, meaning that the downstream team delivers the input in the upstreams planning sessions, the OHS pattern is meant to be applied if an upstream is used by many downstreams and the upstream team decides to implement one API in an «one for all» approach. This is somehow contradictory since it is unlikely that such an upstream implementing an OHS is able to have a close customer/supplier relationship with all its downstreams and fulfill all their expectations at the same time.

#6: The Anticorruption Layer (ACL) pattern should not be needed within a customer/supplier relationship. Note: This checker only produces a compiler warning, not an error. Similarly as in rule #2 the application of the ACL pattern is contradictory with the close customer/supplier relationship, where it should not be the case that the supplier implements changes from which the downstream has to protect itself. However, we only produce a warning questioning this situation since one might argue that a translation layer can be needed anyway and the difference between a translation layer and an anticorruption layer is not clearly defined or depends on how defensive it is implemented.

#7: A bounded context which is not contained by the context map can not be part of a relationship either. This checker provides consistency within the generated model.

#9: A bounded context of the type TEAM can not be contained by a context map of the type SYSTEM_LANDSCAPE. This checker provides consistency within context maps. Can be seen as the inverse case of rule #5.